To Laugh Often and Much

Eric Thiel, a science teacher at Amador Valley H.S. and all-around good guy, spent 38 years in the classroom and decided to retire this year. On Friday night, he handed diplomas to his last batch of seniors. On Saturday night, he died. His family’s still waiting to hear if it was a heart attack or aneurysm, but the cause is less important to me than the fact that a great man is dead. And he was one of the greats.

The timing of his death exaggerates the tragedy, of course – the headline of the local paper shouts, “Beloved Teacher Dies One Day After Retiring” – but the loss of Eric is staggering regardless of the date on his death certificate. To honor my friend, I need to write this eulogy and share three of the lessons he taught this teacher. It’ll help my heart.

1. Don’t fear tech.
On a purely practical level, Eric taught me tech and – more importantly – the confidence to believe I could master all those bits and bytes. One summer in the early 2000’s, Eric spent a month teaching me Dreamweaver, a clunky web builder that made me feel like I’d been swallowed by The Matrix. This was in the days before WordPress templates or Google Sites and Eric encouraged me to steal all of his html code to help get me started.

As our campus tech wizard, he’d often help me after school in the yearbook room, showing me how to daisy-chain my jelly bean iMacs or reinstall broken drivers. The thing is, he didn’t do these things for me; instead, he taught me so I could do them for myself.

Today, I’m comfortable manipulating page source code and I’ve built this nifty little blog to celebrate all things English teacher-y. I don’t know what new tech is around the corner, but I know I’ll be able to figure it out. That’s in large part because of Eric.

2. Take care of people.
Eric loved his subject matter, AP Bio, but he loved people even more. He took the time to see you, talk to you, hug and encourage you. When I announced last year that I was leaving California to move to Idaho, he encouraged me to follow this crazy path. And based on the explosion of love and grief that’s turned my Facebook feed into a beautiful digital wake, I know he did the same for hundreds and maybe thousands of others, many of whom are students who’ve spoken about Eric being the turn in the road that led them to a career in science.

3. Even in the face of tragedy, we keep moving forward.
Eric’s life wasn’t easy, but he was always chipper, always excited about his latest project. His wife, Leslie, died of cancer in 2003, a loss that slowed but didn’t stop him. Their youngest son, Zach, was just starting high school then and I remember Eric told me that he was focused solely on keeping his boy whole. He succeeded, of course – Zach’s now a senior airman in the Air Force.

A few years later, my mom died suddenly of a stroke at age 62. Broken, I returned to school a few days after her funeral and Eric sought me out. I don’t remember what he said, but I do remember that he hugged me, letting me cry on his shoulder for longer than was appropriate. He was cool with my ugly cry and snot on his shirt. I also remember thinking if he could move forward from Leslie’s death, I might also find my way. And I did.

A few years after that, Eric married Kelly, a middle school teacher in our district. In 2012, she gave birth to their son, Noah. Eric joked about resetting the clock, but his children, Zach, Ryan, and Jolie, were now grown and he was absolutely ebullient about this new phase of his life. Today, Noah’s a kindergartner and I hope he grows up knowing that his dad was a joyful man. My heart breaks for Eric’s family, but it’s also strengthened by the thought that Noah is the proof that love and life and happiness continue even after a loss. 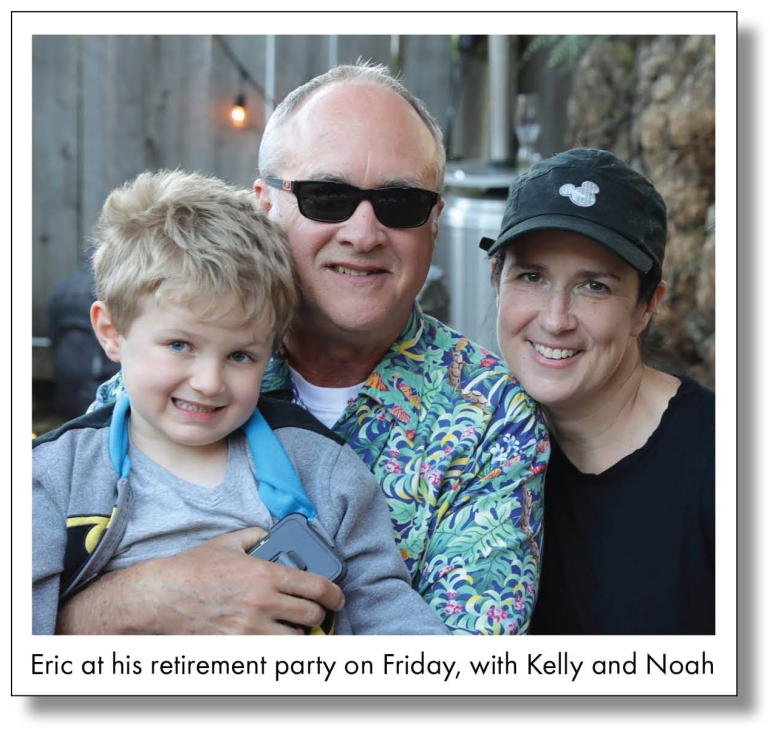 A Go Fund Me account has been set up for Eric’s family and the comments section has become a tribute to a man whose reach was wider than any of us could’ve known. If you’d like to donate or just read more about the impact one teacher made on the world, please visit www.gofundme.com/eric-thiel.

Rest in peace, Eric. I love you.

This site uses Akismet to reduce spam. Learn how your comment data is processed.